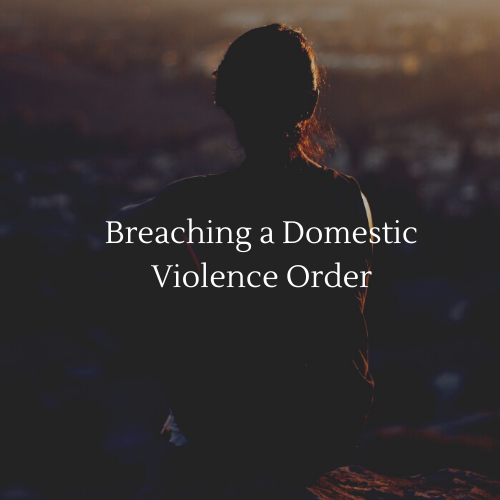 What is a DVO?

Domestic Violence is defined under the Domestic and Family Violence Protection Act 2012 to mean any act or behaviour that towards a person with whom the alleged offender has a relevant a relationship with including;

A relevant relationship is:

When looking at the behaviours listed above the court may have regard to the following acts in deciding if the behaviour complained of is in fact domestic violence;

Causing or threatening to cause personal injury to someone;

An application for a DVO can be bought by the aggrieved person or the police. A Magistrate will usually issue a temporary protection order and then make a final determination if a DVO needs to be imposed at a later stage.

If a DVO is ordered by the court then the person named in the order must abide by all the terms of the order for the length of time the court has set the order. If a person does not follow the DVO then the police can bring a criminal complainant against that person and charge them with breaching a domestic violence order.

What does breaching a DVO mean?

Section 177 creates the offence of contravention of a domestic violence order. The law states that;

(a) was present in court when the order was made; or

(b) has been served with a copy of the order; or

(c) has been told by a police officer about the existence of the order.

(2) The respondent must not contravene the order.

(a) if, within 5 years before the commission of an offence against this subsection, the respondent has been previously convicted of a domestic violence offence—240 penalty units or 5 years imprisonment; or

(3) For subsection (1) (c) , the respondent may be told by a police officer about the existence of an order in any way, including, for example, by telephone, email, SMS message, a social networking site or other electronic means.

(5) The prosecution bears the onus of proving, beyond a reasonable doubt, that the respondent has been told by a police officer about the existence of an order, or a condition of an order.

The prosecution bears the onus of proving, beyond reasonable doubt that the police officer told the respondent about the existence of the order or of a condition of the order.

What acts can be considered as breaching a DVO?

The courts have broadly defined the types of actions that could be considered breaching a DVO. If an order prevents contact then any attempt to contact the aggrieved through any communication method will likely be considered by the court as a breach.

Often the DVO has a terms that the respondent must be of good behaviour to the aggrieved and not commit and act of domestic violence. We have seen the courts find a breach of this condition in the following circumstances;

What happens if you are charged with breaching a DVO

If you are accused with breaching a DVO then the police will investigate all complainants. They will likely seek statements from the aggrieved and the respondent. Never give a statement to police unless you have received legal advice to do so. In most cases giving a statement to police is not a good idea and can lead to a charge or more charges than if you had not said anything to police. You have a right to not talk to police about the allegations.

If the police do bring charges then they will either arrest you or give you a notice to appear in your local magistrates court.

The magistrates court will deal with most DVO breach charges however in certain serious cases the District Court may deal with the charge.

Is breaching a DVO a criminal offence?

What penalties can be imposed?

In practice the court will look at the following factors in deciding a penalty;

The court must also take account of the provisions of section 9 of the Penalties and Sentences Act. In summary those are that the purpose of the sentence is to punish the offender to an extent or in a way that is just in all the circumstances, facilitate avenues of rehabilitation, deter the offender and others from committing a similar offence, make it clear that the community denounces the conduct in this offence, and protect the community.

Domestic violence is an insidious, prevalent and serious problem in our society. Victims are often too ashamed to publicly complain, partly because of misguided feelings of guilt and responsibility for the perpetrator's actions. Members of the community are often reluctant to become involved in the personal relationships of others where domestic violence is concerned. Perpetrators of domestic violence often fail to have insight into the seriousness of their offending, claiming an entitlement to behave in that way or at least to be forgiven by the victim and to evade punishment by society. Domestic violence has a deleterious on-going impact not only on the immediate victim but on the victim's wider family and ultimately on the whole of society. It is not solely a domestic issue; it is a crime against the State warranting salutary punishment. The cost to the community in terms of lost income and productivity, medical and psychological treatment and on-going social problems is immense. Perpetrators of serious acts of domestic violence must know that society will not tolerate such behaviour. They can expect the courts to impose significant sentences of imprisonment involving actual custody to deter not only individual offenders but also others who might otherwise think they can commit such acts with near impunity.

In general the types of penalties the court can impose in order for least to most serious are;

Only an experienced lawyer will be able to tell you the likely outcome.

Are there any defences to breaching a DVO?

Broadly the defences would be;

How can I amend a current DVO?

You can seek a court order to vary a DVO. The variation application would be heard by the Magistrates Court. If you are asking to remove conditions that will reduce the protection of the aggrieved, you will need to explain how the circumstances have changed, and how everyone will remain protected from domestic violence.

The safety, protection and wellbeing of people who fear or experience domestic violence, including children, is most important factor for the courts.

The police will often make submissions to the court whether to vary the order or not.

Should I get a Lawyer?

Yes, yes and yes. A breach of a DVO is a serious charge and viewed so by the Magistrate and the Prosecutor. You do not want to face a court by yourself with this charge. There are serious penalties that can be imposed and the court must also decide whether to record a conviction or not. If a conviction is recorded you could be prevented from travelling overseas or getting certain jobs or work contracts.  Courts have been cracking down on DVO cases lately and the pressure to apply harsh sentences is only increasing.

An experienced criminal defence lawyer will know what the Magistrate wants to hear to reduce the penalty and how to negotiate with the prosecutor where necessary.

How can Clarity Law help me?

We can potentially help with;

What will it cost to get a lawyer?

We can provide you with a fixed fee for all our work once we understand the seriousness of the charges. Our prices are generally around $1,200 for a less serious matter and up to around $3,300 where the risk of jail is high.

The fixed fee will cover all costs, there will not be any unexpected further fees.

If I’m going to engage a Lawyer why should I engage Clarity Law?

At Clarity Law we are experts in Queensland criminal law. We are in the court every single day helping people with criminal charges. We have handled hundreds of breaches of DVO.

We are also a no pressure firm which means feel free to ring, we can give initial advice and help but you aren’t pressured to engage us but of course we are more than happy if you do.

We cover all courts in South East Queensland from Southport to Gympie and out to Toowoomba. We are also a criminal law firm, we don’t do any other type of law so we are in the courts every day helping people with charges like this.  We will also have a local office to you but in many cases we can use zoom, email and phone calls so you never need to attend our office.

Do you have an office near me?

We appear in every court in South East Queensland between The Gold Coast and Bundaberg and out to Toowoomba and beyond. We also have a 5 star rating on Google and Facebook. Check out of customer testimonials here. We have offices at:

We appear in every court in South East Queensland including;

Liability limited by a scheme approved under professional standards legislation